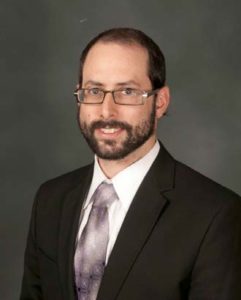 Rabbi Sender Haber has led B’nai Israel Congregation since August 1, 2012. Under his guidance, we have grown and increased our involvement in the greater Tidewater Jewish Community. Rabbi Haber is well known throughout Hampton Roads, having arrived here over 15 years ago as one of the original four members of the Norfolk Area Community Kollel. In that capacity, Rabbi Haber was involved in community wide programming, teaching, and outreach. He has inspired many Jews to expand their Jewish identity and increase their love of Torah and commitment to its observance. Everyone who knows Rabbi Haber is touched by his breadth of Torah knowledge and his ability to convey the wisdom of the ages in such a way as to make those esoteric writings accessible to persons of all levels of experience and a variety of backgrounds.

Rabbi Haber has served in a number of capacities during his years in Norfolk. He has been the leader of B’nai Israel’s daily Daf Yomi program for over five years, meeting each morning at 6:00 a.m, seven days a week with a group of dedicated adult students of Talmud. On August 1, 2012 this worldwide movement celebrated another completion of the 7 ½ year cycle of Talmud study with a siyum attended by literally hundreds of thousands of Jews from around the country meeting in New York, as well as similar gatherings in cities around the world. With Rabbi Haber at the helm, our Norfolk Daf Yomi group was one of only five groups recognized around the Country as exemplary of dedicated Talmud study. Since 2003 Rabbi Haber has taught Jewish Studies at Toras Chaim Day School in Portsmouth, teaching boys and girls of all ages, with a focus on Gemara, Halacha, and Chumash. He has also taught at Yeshivas Aish Kodesh in Norfolk and is currently on BINA High School‘s faculty. He served as Assistant Rabbi of B’nai Israel for six years before assuming its pulpit. He also serves as the unofficial Rabbi of The Lost Tribe, Tidewater’s Jewish motorcycle club! While handling all of these responsibilities, he has continued to participate in numerous chavrusos (one-on-one learning) covering a wide range of topics and writings. Clearly, Rabbi Haber has become an integral part of both B’nai Israel and the larger Jewish community, and in his capacity as our spiritual leader, we can look forward to his continued and increasing involvement in the lives of everyone with a desire to learn and grow. He continues to teach on a part-time basis at Toras Chaim. Rabbi Haber is the author of The Mosaica Haggada as well as numerous articles featured in the Southeastern Virginia Jewish News, Baltimore Jewish Life, The Jewish Press, and other publications.

Rabbi Haber and his wife Chamie have been married for 17 years and have five children, b’li ayin hara. Both come from rabbinic families steeped in Torah, kiruv, and chesed. Rabbi Haber received his Rabbinic Ordination (Yoreh Yoreh) from Rabbi Sender Rosenbloom and Rabbi Mordechai Freidlander of the Jerusalem Beth Din. He was awarded a Teaching Certificate by Torah Umesorah Association for Jewish Day Schools in 2004 and again in 2009. In addition, Rabbi Haber has spent over a decade studying Talmud, Jewish Law, and ethics in some of the world’s most prestigious Yeshivos including  Beth Medrash Gavoha in Lakewood, NJ, and Yeshivas Mir in Jerusalem. Chamie is a talented preschool teacher, having taught at Hebrew Academy of Tidewater for 6 years and more recently at Toras Chaim. She has also been a popular mentor for adults and teens, teaching classes and spearheading learning and fundraising programs, and is the driving force behind the weekly Women’s Learning Program at B’nai Israel for over 10 years. Vivacious and outgoing, she devotes endless energy to her family, the community, and hachnasas orchim, welcoming many Shabbos guests into the Haber home.

When asked about his hopes and goals, Rabbi Haber sees B’nai Israel as “a place where people can come to daven to Hashem and connect to each other and grow in their Torah Judaism. Our wider Jewish Community has many valuable resources, and I believe we can all gain by working together.” Perhaps Rabbi Haber’s strongest demonstration of Jewish values is love for every single Jew, regardless of affiliation, level of knowledge or observance, age, or the circumstances under which he meets them. Rabbi Haber is frequently found at Simon Family JCC and United Jewish Federation of Tidewater events, and it is always amazing to see how many people in the greater community are happy to see him and eager to speak with him for a few minutes. Rabbi Haber summarizes his perspective by saying: “My wife and I have been part of the Norfolk community for most of our adult lives. All of our children were born here. In many ways, our family is a product of the Norfolk community. The mission statement of B’nai Israel is to be ‘The Orthodox Synagogue for all Jews of Hampton Roads.’ Every person who walks into our Shul should feel respected and valued. Everyone has something to add and something to share.”

We welcome and invite everyone in the Tidewater Jewish Community to come and get to know us, just as we pledge to continue to reach out to all of you. We invite you to contact Rabbi Haber through the Synagogue office at 757-627-7358 or at rsh@bnaiisrael.org